Reflecting on Embarcadero Center Chinese Dining Over The Years

Sometimes I get nostalgic about Chinese restaurants that no longer are around and recently I thought about Harbor Village which had locations in San Francisco and Monterey Park.  The San Francisco branch opened around 1985, back in the days when people from Los Angeles used to drive or fly to San Francisco in search of better Chinese food.  Harbor Village in San Francisco was the beachhead for a Hong Kong based Chinese restaurant, which I believe was called Harbourview.   Everybody in Los Angeles drove up to Harbor Village in the Embarcadero Center for their Hong Kong brand of dim sum at the time where dim sum/Hong Kong seafood palaces were just starting to spring up in the United States.  We drove up in the summer of 1987, our first trip away from Los Angeles where we brought our two little kids, Eric (6) and Christina (4) with us.  I remember very little about that lunch except that we had dim sum on carts (yes, I know all dim sum was on carts in 1987 but I remember specifically watching the carts) and we were joined by my former co-worker Marlene Kristovich, who subsequently became a Los Angeles Superior Court judge.   Harbor Village opened a branch in Monterey Park shortly thereafter in 1988.  The San Francisco location closed in 2005 when they lost their lease, while Monterey Park was sold in 2000 to what became Empress Harbor.

I don't know what, if anything, occupied the Embarcadero Center space from 2005 to 2014, but in 2014 the famous Singapore based Crystal Jade restaurant opened up in that location to great anticipation and then fanfare, not surprising given Crystal Jade's reputation and the $14 million spent decorating the premises.  However all that quickly came crashing down when the San Francisco Chronicle's review of the new restaurant savagely ripped into the restaurant, followed by corroborating reports from all around.   Of course I will try any Chinese restaurant once, irrespective of what other people may say, so we showed up in early 2015 to check it out.

Crystal Jade was a giant facility with a large lounge, but I found the interior disappointing, in light of the $14 million spent to decorate the place and I didn’t see anything in the interior even worth photographing.   In one of my very few Yelp reviews, I gave it 3 stars out of 5, with the comment that the $90 dinner was probably worth half of that.   (If I factored the price into the rating it'd be no better than 2 stars.)  The egg white with sea bass was quite good.  We were a little miffed with the “sliced pork shoulder in honey sauce” appetizer for $13.  It turned out to be chashu, though pretty good chashu.  Whole scallops with macadamia nuts was decent, and the beef tenderloin which the waiter raved about was pretty good, but no better than the beef cubes at any number of San Gabriel Valley restaurants.  All in all, the $90+ tab was not money well spent.

Crystal Jade finally gave up after four years and sold the location to the operators of R&G Lounge.  (Crystal Jade would not have lasted nearly as long in the Los Angeles area which lacks the expense account dollars and the geographical concentration of tourists that San Francisco has.)    Harborview Restaurant opened up in late 2018 and we visited there this past June.   Arriving there I was surprised to see the dining room nearly packed on a weeknight.  The crispy baked bbq pork buns were pretty good, though not comparable to San Francisco's best. 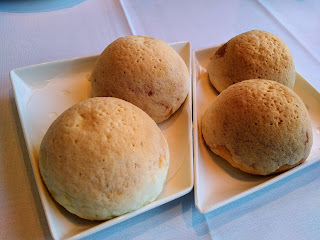 Something unexpected was the lemon chicken (wor shu style, but quite nicely done) a surprisingly old school (meaning Toishanese, pre-Hong Kong immigration era) dish at what otherwise seems like a modern Chinese restaurant. 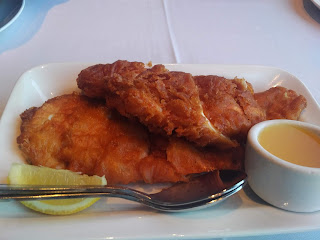 Decent but not noteworthy were the mustard green with mushrooms. 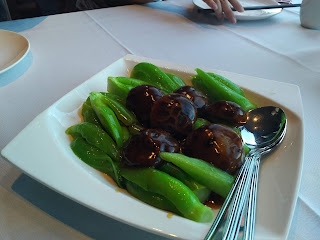 I was surprised when the waiter recommended beef brisket with turnips, but they consider this their signature dish and certainly was excellent. 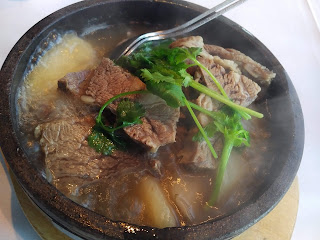 However, like Crystal Jade before it, the quality/price ratio (QPR) at Harborview was certainly not worth it.
Posted by Chandavkl at 11:53 AM