I was excited to hear a year ago that Dragon Beaux was going to open up a branch in San Francisco Ghirardelli Square, intrigued by the prospect of a Class A, authentic Chinese restaurant opening up in such a touristy part of town.  I was also puzzled when I learned that the restaurant would have a different moniker, Palette Tea House.  And I was extremely pleased to learn that Palette Tea House had just opened its doors just a few weeks before my scheduled trip to San Francisco in the first week of June.

From what I can discern, the name Palette is used to distinguish itself from Dragon Beaux, just as Dragon Beaux distinguished itself from the commonly owned Koi Palace, evoking a more artisinal approach towards their menu, their preparation methods, and their selection of ingredients.  This is demonstrated at the beginning of the meal when a selection of colorful and diverse of dipping sauces is placed in front of you. 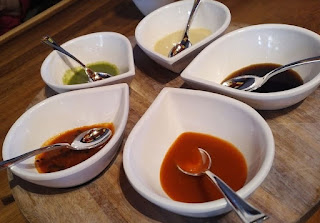 Then you are given your plate, which is not the typical round dish, but rather one shaped like an artist's palette with little spaces to equip your palette with these sauces. 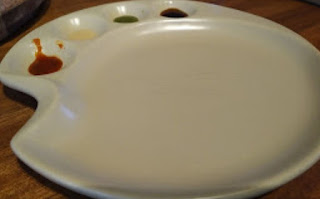 First up was the Dungeness crab cheung fun.  Totally awesome to look at and eat.  Also an indication of Palette's committment to high quality ingredients.  For example, other dishes they serve utilize Kurobuta pork and Iberico ham. 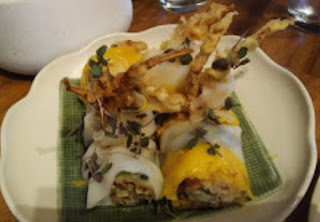 `Palette serves a combination of dim sum and non-dim sum items at both lunch and dinner, leading to a much shorter dim sum selection than Dragon Beaux.  Furthermore, some of the dim sum items are dinner only.  We were lucky to get samples of these two dinner dim sum items.  The item on the left is a lobster siu mai, topped by a fried quail egg.  The liquid in the tube is lobster essence.  While Palette relies principally on trained Chinese wok and dim sum chefs, they also have on staff food professionals with no background in Chinese food preparation who come up with new ideas like the lobster essence.  The item on the right is a Kurobuta pork truffle xiaolongbao. 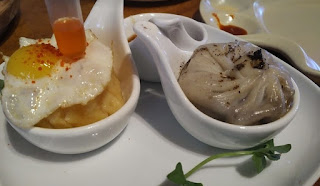 Interestingly the most fantastic dish of all was this ordinary looking plate of fried tofu.  Except this was fried silken tofu, as smooth and creamy as the raw version you see in the supermarket.  And their advanced cooking techniques provide fried dishes which in final form have nary a hint of oil. 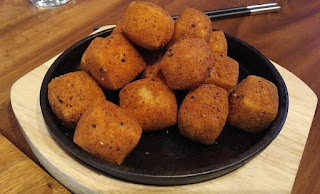 Probably the ugliest thing that typically shows up at dim sum is the wrapped sticky rice.  Not so at Palette where abalone sticky rice becomes an Instagrammable treat.

Palette shares a commissary kitchen with Koi Palace and Dragon Beaux which prepares some of the more common items on the menu.  I wouldn't be surprised if these crispy baked bbq pork buns are one of the dishes prepared at the common facility. 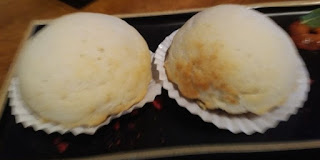 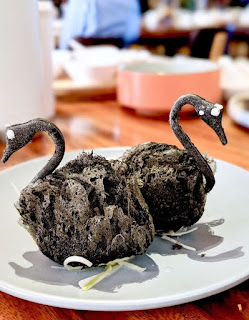 As well as the purple yam almond cream. 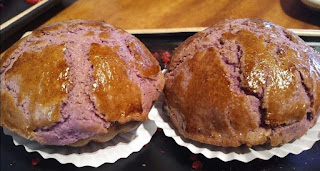 The creativity of Palette Tea House is clearly demonstrated by this almond panna cotta, which is their updated take on the traditional almond jello Cantonese dessert dish. 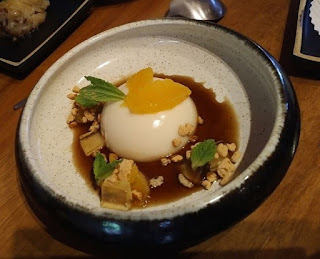 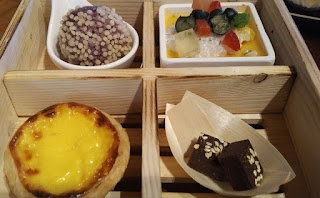 With the return of Michelin ratings to the rest of California outside of San Francisco, interest in Michelin's ratings has of course skyrocketed.  Interestingly, Dragon Beaux does not garner either award, even though universally much lower regarded Chinese dim sum restaurants in the Los Angeles area, Sea Harbour, Longo Seafood and Lunasia do garner Bib Gourmands from Michelin.  This is likely due to the fact that the latter restaurants have strong Hong Kong style seafood dinner menus, while Dragon Beaux dinner fare is based on the rather unusual Cantonese hot pot, which is not the stuff of which Michelin recognition is made.  Consequently, with a well rounded lunch and dinner menu it would not be surprising to see Palette receiving Michelin recognition in future years.
Posted by Chandavkl at 9:44 AM