Dining The Danube From Budapest to Bucharest

Taking our first river cruise on the Viking lower Danube cruise, any food related goals were modest and our expectations were therefore met.  Indeed as far as Chinese food was concerned I wanted to be able to try one new Chinese restaurant, but was doubtful if I could even do that on a tour that spanned Hungary, Croatia, Serbia, Bulgaria and Romania.  Consequently being able to add two Chinese restaurants to the list, albeit before the start of the cruise, was a big success as far as I was concerned.

In that regard, the Viking tour starting in the city of departure before the cruise set sail is what saved the day, particularly since once the cruise started Viking provided all the meals.  Our first meal in Budapest was dinner following our arrival and we were hampered by the fact that we had no local currency, since our cruise was entirely outside of the Eurozone where we couldn't obtain local currency in advance, and of course didn't want to be stuck with unspent currency.  Consequently we were restricted to dining at locations which accepted credit cards.  `Luckily, Callas Restaurant was just a half block away from the K & K Opera Hotel and provided a convenient dinner venue.  I decided to go local and had the chicken paprikesh, which was pretty good.  The others weren't so fortunate, though none of our dishes were over $15 so we couldn't really complain.  Apparently Callas is known for its operatic singing waiters, but they didn't sing while we were there.  I also had a stark introduction to the power of the internet, as my photo below on Instagram elicited a comment from a follower "I'm in Budapest now.  I'll check it out." 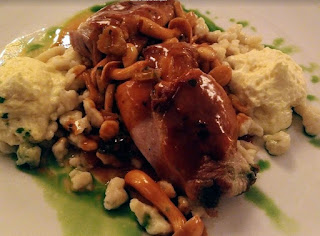 Tuesday breakfast was covered by the hotel buffet.  Interestingly the K & K Opera Hotel had a dedicated breakfast room, whereas every other hotel I've stayed at ran the breakfast buffet out of one of their in-house restaurants.  This buffet was totally ordinary, except for the dirty looking but delicious orange juice.

For lunch/dinner after the morning city tour I wanted to return to the West End Center mall we visited in 2014, since they had a very interesting food court there, and all the vendors accepted credit cards.  The questions were whether it was close enough to this trip's hotel, and would the weather hold up to enable us to get there?  In the end the answer to both was affirmative though not without doubt.  My anxiety about finding the route to get there was relieved when at the end of the morning tour, the tour bus drove right by the Western train station on Terez a block from the mall on the way back to the hotel.   The others didn't want to eat when we got back to the hotel, so I used the time to scout the area.

I walked up Andrassy towards Terez, noting the subway entrance should the rain get heavier and necessitate an alternate means to get to the mall.  I decided that I would head to the mall to see if there might be a new Chinese restaurant there.   I  cut over on Oktagon towards Terez, noting a closed Sichuan street food restaurant called Biang, which seemed out of place.  As I read later, Budapest actually has a Chinatown adjacent to the warehousing center where imported Chinese goods are processed, quite analogous to the unknown Chinatown in Madrid that I uncovered during last year's trip to Spain and Portugal, which coincided almost to the day with this year's trip.  On the next block I passed W & L Restaurant, whose signage indicated it was a Vietnamese pho restaurant, but upon closer look  whose menu actually had more of a Chinese influence. Hooray!  My mission was already accomplished.  And this looked like the real stuff, too, as the menu had a Chinese hamburger, presumably the Shaanxi item typically given that description.  Unfortunately they told me that this was a breakfast item that was out of stock.  However the fried pork dumplings, which were in reality fried wontons, proved to be a satisfactory substitute for just $3. 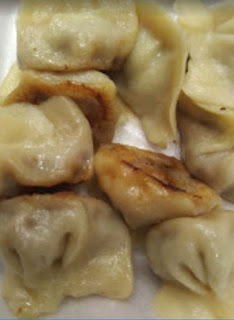 My food mission for the trip complete, I went back to the hotel and waited for the others.  We then went to the West End Center Mall and checked out the food court.   As it did in 2014, the food in the food court was very visual and very interesting.  There were so many items that you had to ask "What's this?" and be told that the item was a breaded fried cheese sandwich or probably more technically fried breaded cheese.  Interestingly the same odd looking items were available at different vendors, sometimes looking the same, sometimes the same dish prepared differently.  For example, three different restaurants had different versions of Hawaiian chicken, a chicken schnitzel topped with two pineapple rings.  Here's one sample. 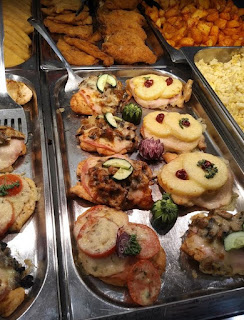 On the other hand, the three versions of sweet and sour chicken looked the same. 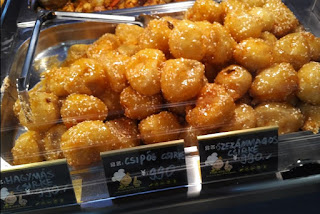 I ended up with two dishes from Mediterranean Grill that were particularly interesting.  One was about $3, the other about $5.  These were chicken with broccoli, and fish with cauliflower and broccoli.  Both were a little mushy and bland, but for the price who can complain? 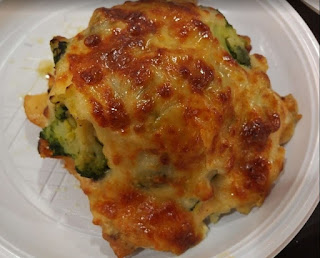 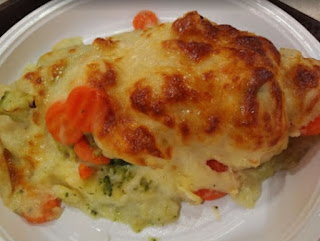 The same Chinese restaurant, Wok N Go Noodle House, that was in the food court in 2014 was still there.  But where it was semi-decent back then, it was bad this time, and two people in our group actually went back to scold them about how overly salty their food was.  They explained that's how the locals like their Chinese food.  However there was another primarily Chinese restaurant in the food court, Azsia Etterem, which did not serve overly salty food. 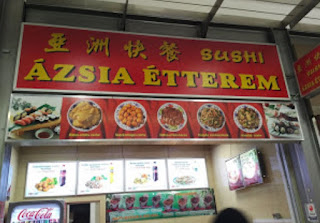 Two dishes from Azsia Etterem, the marinated tofu strips (a surprisingly authentic dish) and mixed vegetables added up to $3. 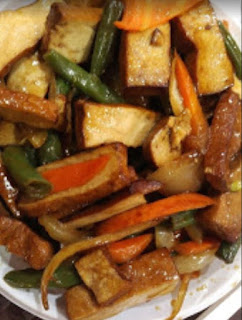 We boarded the Viking Idun around noontime the next day. (We had no idea that the Idun had been involved in a collision in Belgium the month before until the Danube collision in Budapest two weeks later involving another Viking boat that was commencing its cruise just like we did.) Rooms were not ready so we headed straight for the buffet lunch which was extremely good, highlighted by beef strips, chicken broth with tofu and salmon sandwiches.  This turned out to be a false indication of the food on the boat, which was generally ordinary except for an occasional highlight.  Also regional tasting menus made things interesting, though were not particularly tasty.

Our first stop on the cruise was at Kalosca, Hungary, home of the Paprika Museum.  We were bused to the Bakodpuszta Equestrian Center, where besides a muddy equestrian show they passed out a local culinary treat, a paprika sandwich made with curly hair pig drippings (i.e. lard).  Tasted awful but it was quite photogenic. 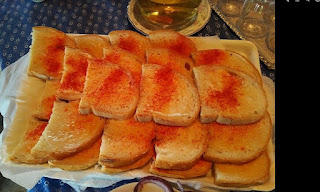 The first onboard regional tasting menu was featured by Hungarian goulash, no big deal since we seemingly had that dish a dozen times on our prior visit to Hungary.  The next night's Croatian sampler was a bit more interesting, led off by the intriguingly named cevapcici and avjar, spicy minced pork on skewer with red pepper relish. 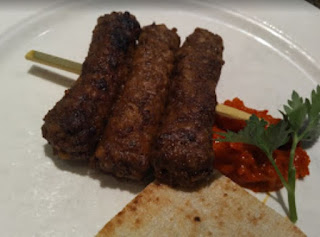 But if it just looks like pork sausage with a stick through it, that's pretty much what it was.


The main dish was the Croatian brodet, lightly salted cod.  It was pretty good, though nothing particularly outstanding either.  The rozata, Croatian carmel custard was nothing out of the ordinary. 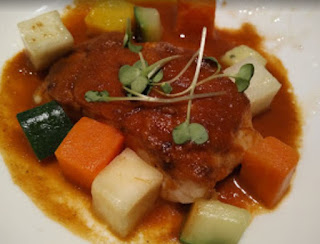 The next night was a Balkan buffet.  Mostly blah except for the apricot dumplings. 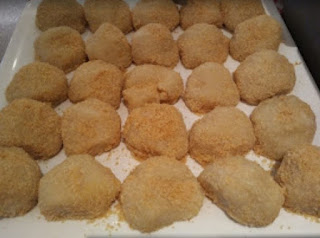 The Bulgarian tasting menu dinner was next.  The roast of lamb was OK but not worthy of a photo.  The Kaskaval pane, Bulgarian fried cheese was interesting, with the cheese itself like a giant fried pale Velveeta. 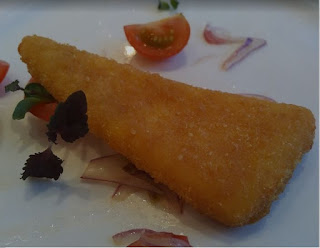 The Bulgarian dessert was fluffy mekitsi, described as doughnuts and honey dip.  The doughnut was hard and the dip seemed to be pure honey.  It also wasn't very good. 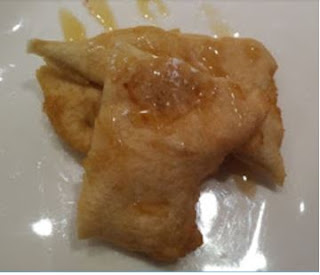 The next night on the boat was unthemed.  And for some reason, one of the dishes was fried Chinese egg noodle.  Hooray!  Finally Chinese food on the boat.  Except that it was an abomination.  I only ate a little and discarded the rest. 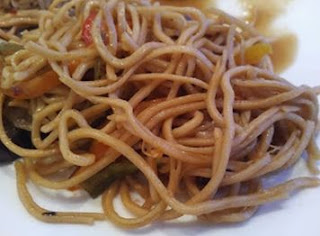 Fortunately the menu also had something I had never heard of so described--trout fillet.  And it was pretty good. 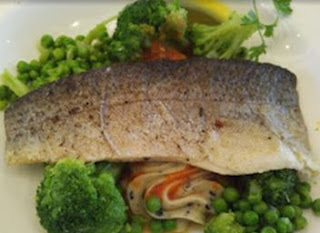 The last full day of the cruise had an all day tour, so lunch was provided off the boat.  At Mexana Restaurant in Arbimessi, Bulgaria, they gave us this giant piece of something like pita bread instead of more normal sized rolls. 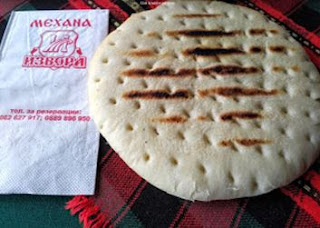 The entree was a pretty tasty Bulgarian chicken stew. 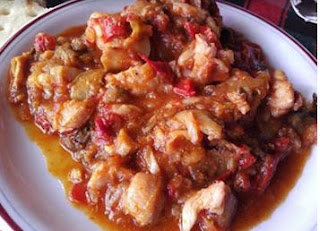 We came back on the boat for our last dinner, featuring the Romanian tasting menu.  The entree called mamaliga, was quite good with a cornmeal patty topped with telemeo cheese. 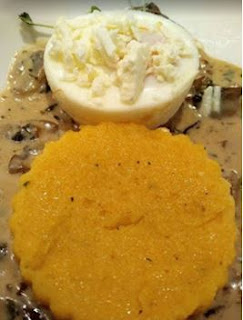 Dessert was papanasi, a Romanian cottage cheese donut with berry and cream sauce.  This was also a highlight. 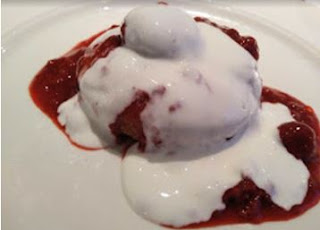 We then disembarked from the boat in Giurgu, Romania.  But the tour wasn't over as we had a final half day tour of Bucharest, which included lunch at Pergasus, a restaurant that opened in 1939, apparently suspended operations during the Communist regime, and then recently reopened.  We had what looked like a Romanian goulash which was not very good. 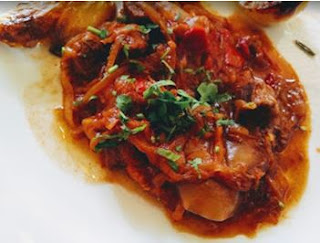 The tour ended but we had one more night in Bucharest before we flew out.  During the tour, the guide warned us of a limitation on the use of credit cards in Romania,  I always thought that credit cards were freely usable in Europe, and hence there was no need for monetary conversion for short stays in non-Eurozone countries like Hungary, Croatia, Serbia, Bulgaria and Romania.  However at least in Romania, if not some others, credit card purchases exceeding $20 have to be accompanied by the credit card PIN.  The what? Well, when you get a credit card it apparently comes with a PIN. But nobody requires use of a credit card PIN in the US and I have no idea what the PIN is for any of my cards. So the only real solution for us to eat dinner on our last night of the trip was to eat in the Radisson Blue Hotel restaurant and charge the meal to the room.  My pappardelle with salmon from the Caffe Citti was actually quite good. 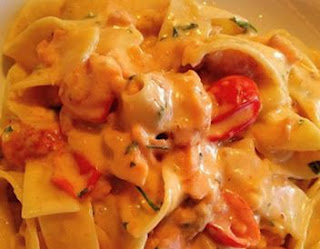 We didn't expect food to be an important part of the trip, except perhaps to discover some regional specialties, and that held up true to form.  And as far as Chinese restaurants go, I don't recall seeing a single one on any of our excursions once we started the cruise, though it would have been difficult to discern anyway due to the mostly Cyrillic alphabet used in the countries on the tour.