Things are really changing in my old neighborhood, which was called Crenshaw back then, though this seem to have been replaced in these days of gentrification by the term West Adams (used to describe the area south of the Santa Monica Freeway).  I lived on Chesapeake Ave. between Jefferson and Adams, two blocks from Dorsey High School.  We moved there in 1952, breaking away from the neighborhoods near downtown Los Angeles where many Chinese Angelinos were confined to by housing discrimination.  The 1948 US Supreme Court decision outlawing deed covenants restricting ownership of property to Caucasians was an impetus for Chinese and other minorities to expand their presence in Los Angeles neighborhoods, though de facto housing discrimination continued in some local communities for many more years.

When we arrived in Crenshaw the neighborhood was in transition, with Chinese, Japanese and African Americans moving in and whites moving out.  But the Crenshaw area, including Baldwin Hills, Windsor Hills and Viewpark, did stabilize and was reasonably well integrated, with my graduating class at Dorsey High School almost equally mixed with Asians, Blacks and Caucasians.   It was only after the 1965 Watts riots made their way to Crenshaw that the composition of the area became unbalanced.

Now I know things have been changing lately in the Crenshaw area, reading  in L. A. Times articles about how a combination of the Expo Line, the under construction Crenshaw Line, and the general eastward creep of the Westside have brought new home buyers into the area.  However I was still stunned to read last year that what now is referred to as West Adams is now one of the hottest housing markets in the United States.   The little 1,200 square foot house on Chesapeake which we bought for $9,000, is now Zillow valued at $785,000.  (Last year it was $611,000).

There really was no truly authentic Chinese food in Los Angeles in the old days, so in Crenshaw we were satisfied with local Chinese restaurants such as Four Seasons on Santa Barbara Ave. (now MLK Blvd.), Tai Ping on Crenshaw for more upscale sit down dining, and Kim's Restaurant next door, Paul's Kitchen #2 and Confucius Delicacies on Jefferson Bl. for homestyle Cantonese cooking, and the Sakiba at the Holiday Bowl on Crenshaw for bbq pork noodle soup.  I honestly can say that I don't miss any of those eateries.  Though we lived in the area until the 1990s, it was really no big deal to drive for Chinese food to Chinatown, or on weekends, the San Gabriel Valley.

Since I'm still in the area once or twice a week I've kept pretty close track of the Chinese food in Crenshaw/West Adams and it's all pretty much either steam table fast food or buffet, with Kim's and Tim's Kitchen succeeding Paul's, managing to survive as sit down options. And the area hasn't gentrified enough yet to lead to any legitimate sit down Chinese openings.   Still when I saw that New China Mongolian BBQ was opening at 4134 Crenshaw, where a string of steam table places has operated for 25 years, I dashed on down there to check it out.   I was expecting more of the same Chinese fast food, except that the Mongolian BBQ part of the name threw me.  Mongolian BBQ in the 'hood?  But when I stepped inside, while I did see the Mongolian BBQ grill, it was the layout of the rest of the restaurant that struck me.  New China Mongolian BBQ is a self-serve takeout restaurant which sells food for $3.69 a pound.   (Offhand I can't recall seeing this particular format for a Chinese restaurant before.)  Think taking food out from a standard Chinese buffet, except that there's almost no place to sit down and eat.  The self-serve steam trays are comparable to the selection available at smaller Chinese buffets, with a nice variety of chicken, rice, noodle, beef, vegetable and pork dishes.  And the food is good buffet quality (if that's not an oxymoron)--and see what I got for $4 in my first visit there. 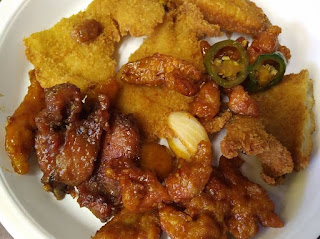 While New China Mongolian BBQ may not be my new absolutely favorite Chinese restaurant, I can see myself coming here frequently.  And I haven't tried the Mongolian BBQ yet.

Posted by Chandavkl at 3:44 PM