With our second trip to San Francisco in three months we took advantage of this to have another dim sum lunch at Dragon Beaux in San Francisco.  After my previous visit this year, I suggested that Dragon Beaux might well be the best dim sum restaurant in the United States.   And nothing in this visit suggests any different conclusion.

Of course the trouble with Dragon Beaux is that it is so good that it is also very popular and often requires a long wait to get a table.  Since this time we were on our way back to Los Angeles, I timed our arrival for 1:45pm on a Thursday, and sure enough the crowd has receded enough such that there were empty tables.  My plan was to order all new dishes, that were highly recommended on the food message boards.  Before I could order, a server came around with a tray of Macau egg tarts.  Since we had recently eaten wonderful egg tarts at Pastels Belem in Lisbon, and cheese tarts from the newly opened Bake in Westfield's San Francisco Center on Market Street, it made sense to grab these for comparison.  While I preferred the Portuguese tart from Lisbon, Mrs. Chandavkl thought the Dragon Beaux Macau tart was just as good. 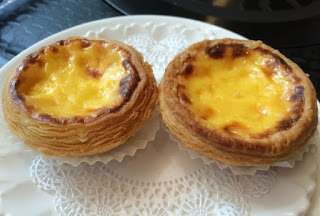 After placing our order, our choices started coming in.  First was the taro puff, not particularly one of my favorite dim sum items and indeed in hindsight I wonder why I had eaten them as many times as I had in the past.  No question with the Dragon Beaux version, so light and delicious! 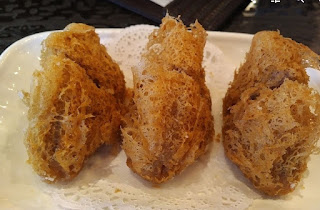 Next up, another real winner, the stuffed eggplant.  Not as fantastic as some commentators had made them out to be, but still probably another best in class item. 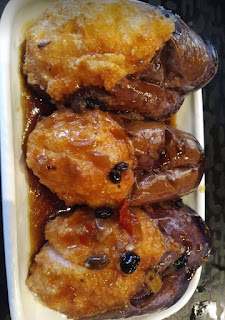 Next came the daikon cake, again touted by some to be transcendental.  (If you notice a pattern, compared to our previous visit which focused on innovative items, this time we had mostly traditional items.)  This was certainly good, but not necessarily better than everybody else's. 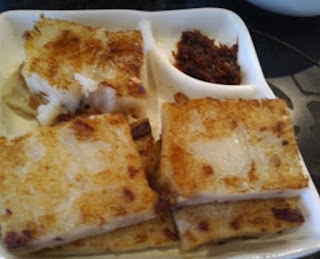 Perhaps most highly rated among commentators was the scallop shiu mai, a regular shiu mai topped by a scallop slice on top.  This certainly as good as shiu mai gets. 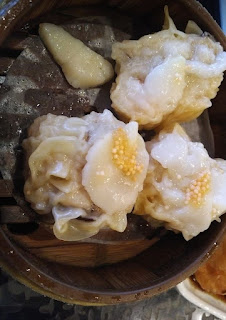 I made one random choice off the menu, the Mongolian beef bun.  I was a little apprehensive since I've had some pedestrian non-Cantonese steamed beef bao recently.  However this dish was exquisitely presented as a sizzling/smoking dish.  While not knocking it out of the park, this was a nice dish with a sweetness in the bun contrasted to the salty interior. 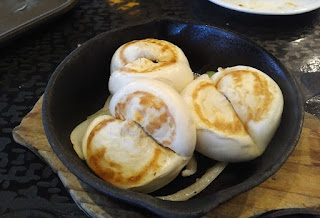 Last on the list was the mysterious "glutinous pillow", very highly rated by the commentators.  As it turns out, it was merely a fancy name for the ordinary hom sui guk.  However this was not an ordinary dish, with the crispy crunchy exterior compared to the soft interior making this by far the best version of this dish I've ever seen. 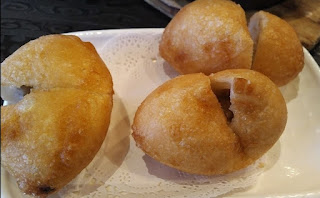 As my prior posting indicates, Dragon Beaux certainly hits it with modern dim sum, and this visit confirms that traditional dim sum is also superior.