As indicated in my summer LA Weekly piece on the recently opened Xiang Yuan Gourmet in Temple City, the Los Angeles area has not welcomed a new dim sum contender to challenge the existing stalwarts in nearly a decade.   While Los Angeles continues to generally widen the lead over the rest of the United States in purveying the best Chinese food in the country, the Los Angeles area dominance in dim sum which was so wide a decade ago has completely evaporated. The San Francisco Bay area is now the US king of dim sum with its powerhouse lineup including Dragon Beaux, Koi Palace, Hong Kong Lounge #1, the unrelated Hong Kong Lounge #2, and Lai Hong Lounge.  In the words of Chinese restaurant industry maven Robert Lu (known as the irrepressible "ipsedixit" for nearly two decades on Los Angeles area food message boards), Los Angeles area dim sum "has largely stagnated in terms of innovation."  In contrast, the Bay Area has stepped up with new and better varieties of dim sum to catch, and now pass Los Angeles in the past three years or so.  Shades of much of the 20th Century, when Angelinos used to travel up to San Francisco to get a better brand of Chinese food, and it's deja vu again insofar as dim sum is concerned.

However, the worm may be starting to turn, first with Xiang Yuan Gourmet, but especially now with the opening a few weeks ago of Longo Seafood in Rosemead at 7540 E. Garvey Ave.   Game changing dim sum at this street location would be wholly unexpected.  Not that there's anything wrong with this location per se, given that it has hosted at least 10 different dim sum eateries in a three decade period.  It's just that over this period, it has been home to so many undistinguished dim sum restaurants that finding high quality dim sum in this building would be nearly unimaginable.  With the exception of Donald Lam's Seafood City, the first dim sum restaurant to occupy this spot and which reigned here in the mid-1980s, dim sum at this location had been known more for value pricing and not gourmet quality.

But with the arrival of Longo Seafood, everything has changed.  In hindsight, there were small clues that something was happening here.  Where replacement restaurants at this location previously took just days or maybe a few weeks to open up, this location was closed for the better part of a year while renovations were in progress.  And it wasn't that the remodel was dragging along slowly, as there was clearly continuously activity.   This all made sense when the restaurant opened earlier this fall, revealing a sleek, total and upscale upgrade to the location, highlighted by its gigantic chandelier and similarly gigantic TV screen.  Longo Seafood is definitely one of the nicest Chinese restaurant dining rooms in the San Gabriel Valley.

Of course good decor is nice, but everybody's interested in the food, and the crowds have been enthusiastic, sometimes filling the restaurant by 11 am even on weekdays.  No surprise given the existence of dim sum items not ordinarily seen in Los Angeles, such as lobster rolls at eight pieces for $19.99, black truffle shumai (below) at six pieces for $15.99, and foie gras shrimp dumplings also at six pieces for $15.99. 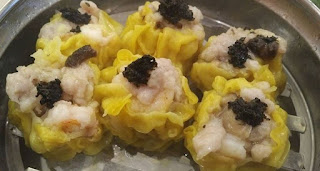 Steamed rice rolls are not the rectangular cheung fun typically seen at dimsum, but as seen below are elongated rice noodle twists served on regular plates with varieties such as wagyu beef, vegetable and truffles, shredded duck, and using red rice rolls, spareribs.   With their extensive dim sum menu it'll take several visits to get a complete reading on Longo Seafood, but certainly it's so far, so good. 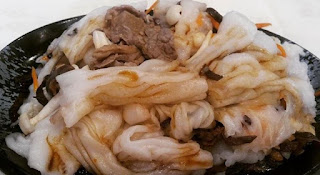 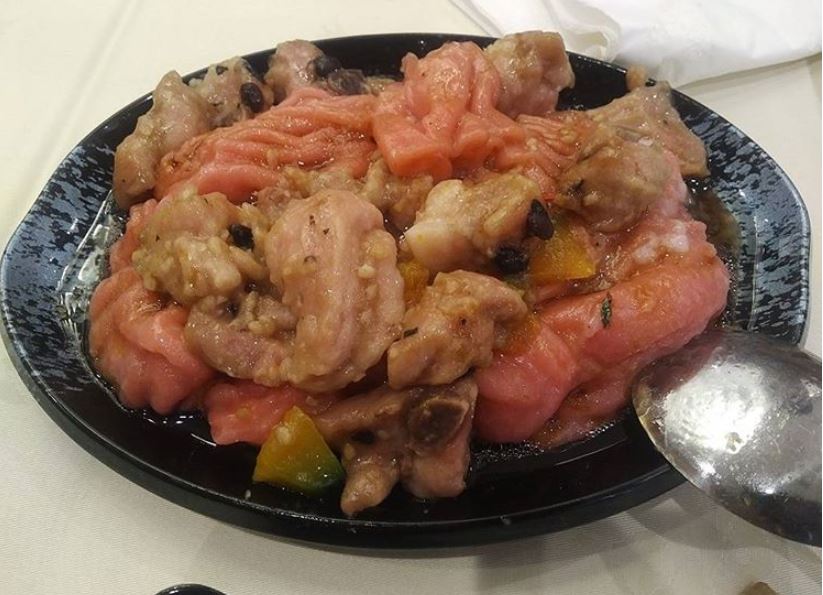 Posted by Chandavkl at 1:37 PM