Besides falling behind San Francisco when it comes to high end dim sum, Los Angeles also trails San Francisco and New York insofar as channels for dim sum sources are involved.  In Los Angeles, you're pretty much limited to medium to large size dim sum palaces.  You can dine in for dimsum at a place like Sea Harbour in Rosemead, or find one of the other sit down dim sum restaurants which has a take out annex such as Longo Seafood in Rosemead or CBS Seafood in Chinatown to get your dim sum to go.

In contrast in San Francisco there are a large number of small dim sum purveyors which stock behind the counter dim sum, which you can order for takeout or eat on premises at tables provided for your convenience.  Yeah, there are a couple of those here in LA, but most locals probably can't identify one of these offhand.  There's also the New York model where a sit down Cantonese restaurant will have behind-the-counter dim sum which you can order for takeout, but you really can't sit down and eat it there.

All of which makes this month's opening of Sheng Hui Dim Sum in West Covina, a seemingly small, innocuous eatery, potentially more significant than one might imagine upon first glance.  It's a model different from anything else mentioned above, a small sit-down dim sum restaurant.   You sit at the table and order from the menu. There's no wait staff, just the cook in back and his wife up front. Certain items are sitting pre-made behind the counter in the familiar metal trays and brought to your table.  Likewise other items are resting in a heated case.  On the other hand, some items are cooked to order and brought to your table.   Most items are $2.88 and the selection is relatively small, comparable to the small Bay Area take-out/sit down eateries.  Dim sum at Sheng Hui compares extremely favorably to the best of the cart places in the San Gabriel Valley.  Their pineapple taro  (below) and pineapple egg yolk dim sum are a revelation.  They apparently also at times stock some fanciful paste filled steamed buns (e.g., rabbit, piggie, panda), but they weren't available when we went there. 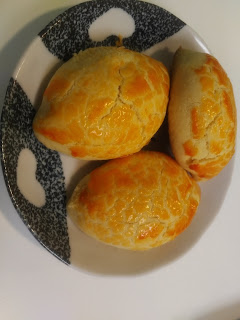 Sheng Hui Dim Sum is at 2889 E. Valley Blvd., in a part of West Covina wedged between Rowland Heights and Walnut. 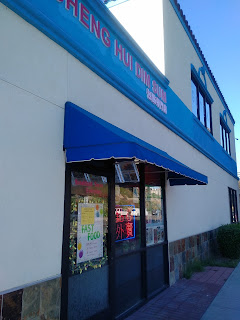 Posted by Chandavkl at 2:56 PM