A couple of years ago I wrote this piece about L.A city government stupidity dealing with traffic issues caused by people looking for the Hollywood sign and the Griffith Observatory in and around my Los Feliz Oaks neighborhood, which is adjacent to, but does not provide access to these attractions.   More recently the Los Angeles Times described the inability of the city to implement safety improvements in our neighborhood even though residents raised the funds for the improvements themselves.  Or, as I titled my original piece, "If The Government Only Had A Brain."

My previous piece dealt with the western access to our neighborhood along Franklin Ave. and Bronson Ave., but we had more egregious city government stupidity on our eastern flank along the Fern Dell Dr. entrance.  Fern Dell Dr. is one of two access roads to the Griffith Observatory, and indirectly, the Greek Theater.  The other access to both is Vermont Ave.  Fern Dell Dr. is also the western border to Griffith Park.  Griffith Park closes daily at sunset.  The Observatory does not.  But in order to enforce the closure of the main park, at nightfall Fern Dell is blocked at Red Oak Dr., just north of Los Feliz Blvd.  However there was nothing to alert travelers along Los Feliz Blvd. who want access the observatory that Fern Dell Dr. is blocked ahead, so every night legions of unsuspecting drivers hit the road block and are forced to either make a U-turn and head back to Los Feliz Blvd. or turn left onto Red Oak Dr. into our neighborhood, where they wander like lost ants through our residential streets, perhaps never to be heard from again.

This has been going on for quite a while, and we had actually gotten used to it, though how difficult would it be to inform drivers turning onto Fern Dell Dr. that they are taking the road to nowhere?  Then one evening there were encouraging signs.  There were two traffic control officers in the area, one on Los Feliz Blvd. and one on Fern Dell Dr.  At last!  The officers were going to inform drivers that unless they were headed into the Los Feliz Oaks, they should not turn onto Fern Dell Dr. because it was blocked ahead!  Well, not really.  The officers were actually throwing gasoline onto the fire because they were directing traffic to make it EASIER for cars to turn from Los Feliz Blvd. onto Fern Dell Dr. and running into the dead end.

All this led me to contact the 4th District Los Angeles City Council office in an email I entitled "Traffic Control Insanity."  While I had no illusions that this would improve anything, at least it made me feel better.  But a funny thing happened.   After a few weeks I was contacted by a sympathetic city bureaucrat who suggested I contact my homeowners association to sponsor a request to the city.  I demurred, indicating that I didn't want to get involved with a long, drawn out process.  But she responded that she would contact the homeowners association, which she did.  The homeowners quickly agreed and guess what?   They put up a sign on Los Feliz Blvd. and Fern Dell Dr. that alternately flashed "Road Closed At 6 pm" and "No Observatory Access."   Hooray!  You can fight city hall!  And the government does have a brain. 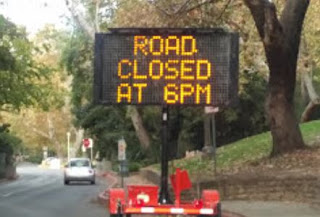 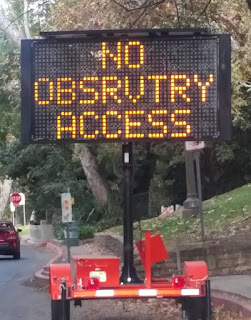 Unfortunately my euphoria only lasted a few weeks.  For some reason, while the signs were still there, they were turned off.  And then the signs were carted away.  Perhaps they thought the signs had done their job, though obviously even before the signs went up, it was a new bunch of drivers lured into the trap of driving into the road closure every day.   So it's not like having the sign up there for a few weeks would permanently stop cars from trying to access the Observatory on a closed road.

Then suddenly the signs came back!  You think that would make me happy, but it doesn't, and for one simple reason.  The signs were not replaced at the corner of Los Feliz Blvd. and Fern Dell Dr. where cars could see the warning before they turned onto Fern Dell Dr., and avoid the roadblock.  No, the new signs have been placed just a few feet in front of the roadblock.  Which means that by the time you see the signs, it's too late to avoid the road closure.  And you'll have to make a U-turn, or wander around our neighborhood like lost ants, perhaps never to be heard from again.

Alas, if the government only had a brain.