In the course of writing dozens of Chinese restaurant related articles, most of the articles are written over an extended period of time, from a few weeks to several months, though the actual total elapsed writing time is not that great.  But once in a while the timing for inception to publication is rapid, sometimes breathtakingly so.  A good example of this is my article in today's LA Weekly on Noodles Time restaurant.  I had no idea Noodles Time even existed until 2 pm on Tuesday, and it was a fluke that I found it.  While I often drive through Chinatown, I seldom actually stop because parking is so problematic, particularly on weekdays.  Occasionally I need to visit Cathay Bank, but typically go to Monterey Park or Alhambra where there's convenient parking.  But  on Tuesday I decided go to the Chinatown branch which does have parking, albeit with an inconveniently located parking entrance.  Anyway, road construction sent me off track and right by Alpine Plaza where I noticed the strange sign saying "Vegan."  So after visiting the bank I decided to stroll down the block where I found this restaurant with its unusual menu and setting. 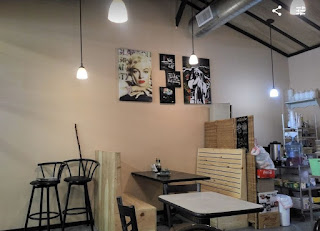 After leaving the restaurant I decided that it was interesting enough to share, but certainly there wasn't enough for any extended kind of writeup.  I was just going to do a paragraph on the food message board about how Noodles Time had been open for a year in Chinatown and hadn't been noticed by myself or anybody else, and how remarkably different it was.   However, when I started writing on Tuesday evening it got a little bit too long for a message board post, so I decided to do a post on this blog.  But the post didn't read very well so I put it aside.

The next morning I decided to update the post to make it flow a lot better.  At this point, remembering the admonition of LA Weekly food editor Katherine Spiers as to why I hadn't submitted a prior Chandavkl blog post item to be run as an LA Weekly article, I started to think about what would be needed to make it suitable for outside publication.  Since what I had written was way short lengthwise of what would be needed, I did some additional background research about Alpine Plaza.  That's when I found out about plans to build a Blossom Plaza like project on the current site of Alpine Plaza.  Initially this was a bad thing, because it contradicted the tone of my article about how the area around Alpine Plaza had yet to be affected by the boom in Chinatown.  Furthermore, it seemed to make the story less interesting and less likely to be published since it raised the possibility that the restaurant's existence might be transitory.  However, I managed to rework the article with the new information, and into something that not only was coherent, but much better than what I had originally written.  So I sent the article in to LA Weekly on Wednesday afternoon, and it published on Thursday morning, less than 48 hours after I first became aware of the restaurant.

And that's how sausage and laws are sometimes made. 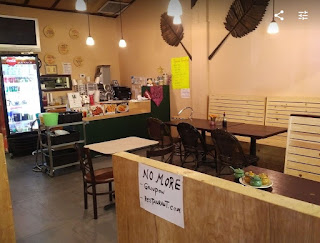 Posted by Chandavkl at 2:22 PM