Though David Chang's Majordomo opened roughly five years ago, I never had a chance to eat there.  First of all, until the pandemic, reservations were nearly impossible to obtain, and I'm not one to wait in line for food, be it an hour's wait at a restaurant, or having to fight to get a reservation to eat at the restaurant two months later.  And that aside, I would have preferred to share the meal there with the entire family, but I believe the maximum group they would accommodate was six persons.

However I recently noticed that post-pandemic reopening, there have been no problems getting reservations at Majordomo, so on just a few days notice I was able to get a reservation for two just days before my birthday in August, so why not?  Although Majordomo is located in what is technically Chinatown, it's in the far northern portion on a street I never heard of and obviously had never been, just a short ways from Lincoln Heights, with no signage visible from the street, so I wasn't absolutely sure that I was there until I made the last turn into the patio.  We got the latest available reservation at 6:30pm, but were delayed by traffic and other matters and arrived a half hour late.  When we called ahead about our dilemma they said there would be no problem, except that we would have to vacate by 8:30pm, which was fine with us.  Strangely, however, when we arrived at 7pm the restaurant was still half empty, even though there were no 7pm slots open when I made my original reservation.

The food was excellent from the get go.  The bing with eggplant and pine nuts was terriffic. 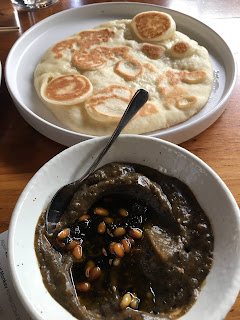 The heirloom tomato salad was out of this world.  Never thought something so basic could be so good. 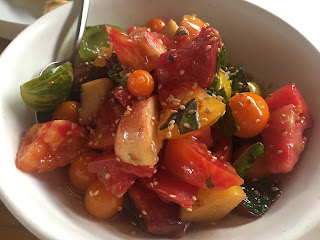 I hate mushrooms, but the buzz about the mushroom crispy rice was so good that I ordered it anyway.  And it was as good as advertised. 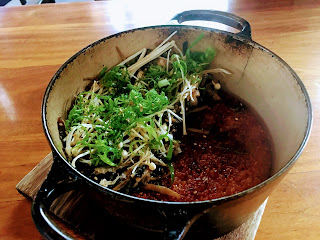 The grilled striped bass was actually not as good as the first three dishes, but it was still quite good. 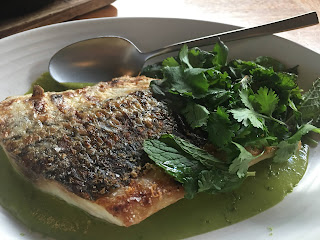 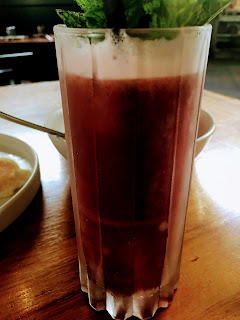 Interestingly, there were still some empty tables even when we finished.  Afterwards we took a peek at what the surrounding buildings looked like.  Certainly an area in transition. 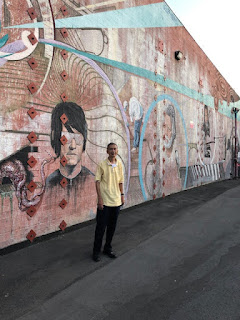 The August meal was so enjoyable that we returned three months later for Mrs. Chandavkl's birthday.

This time we had the beef shank bing.  The beef was a little too spicy for us but the bing was great. 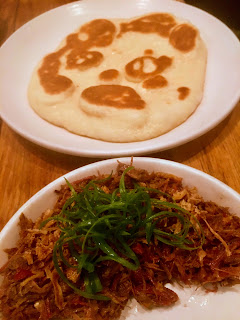 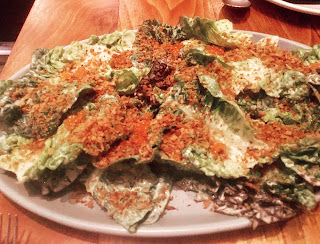 The innocuous sounding boiled chicken was a true delight.  A whole chicken was slow boiled and served two ways.  First was the white meat served with chicken flavored rice, sort of a spicy version of Hainan chicken. 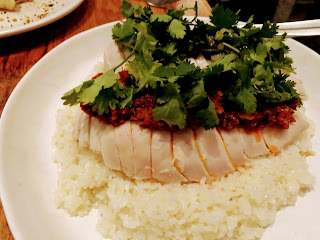 The rest of of the chicken was rendered into chicken noodle soup with a hand cut Korean noodle that was very reminiscent of biang biang noodles. 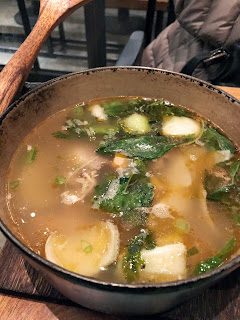 Thanks to the friendly people at the table next to ours, we also were able to sample the short rib fried rice, a derivative dish of the whole plate short rib. 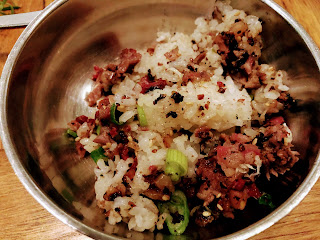 And as a birthday surprise, they also ordered the coconut rice pudding for us.  Such nice people! 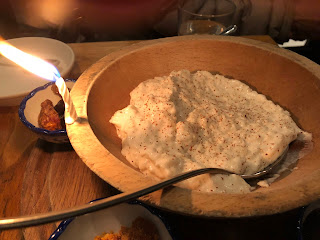 Once again, the restaurant never did fill up completely.