Having eaten at nearly 8,000 Chinese restaurants I had reached a point where I actually wrote that every new Chinese restaurant I visited had a certain sameness.  Yes, there were wide variations in the restaurants I ate at, from giant Hong Kong style seafood palaces to buck-a-plate Americanized Chinese express food in the inner city to small town Chinese buffets to mom and pop regional Chinese cuisine restaurants where mom or pop had to ask a bilingual English speaking customer to find out what I wanted to order, to everything else in between.  But I had been to so many Chinese restaurants in whatever categories may come to mind that most new restaurant visits were a case of deja vu all over again.

So with this background, to find a Chinese restaurant where I would have a number of different Chinese first experiences means that restaurant is something special.  And that was certainly the case with Eight Tables on Broadway in San Francisco Chinatown.

Eight Tables is located in the China Live complex conceived by chef and restauranteur George Chen.  My earliest recollection of the three story China Live space was back in the 1980's when the historic 644 Broadway location was rebuilt, and then occupied by Ocean City, one of the grand Hong Kong style seafood restaurants and banquet facilities of the day.  Ocean City's owners also became perhaps the most notorious Chinese restauranteurs in American history when they literally folded their tent in the middle of the night, moving out anything they could carry before daybreak, stiffing the restaurant's creditors and employees.

The space subsequently became Gold Mountain Restaurant, a banquet facility so popular that even as a Los Angeles resident, I attended a number of banquets there.  The closing of Gold Mountain a decade ago was indeed ominous, perhaps portending tough times ahead for San Francisco Chinatown, and in hindsight marking the beginning of the decline of Cantonese banquet facilities as the venue of choice for Chinese American weddings.   Not surprisingly, George Chen's proposal to take the old Gold Mountain location and convert it into something like a Chinese version of Eataly was met with skepticism.  However, both China Live and Eight Tables have proven Chen to be prescient.

The clearly unique thing about Eight Tables is that it has taken the Chinese concept of private chateau dining, making the diner feel more like they are eating at somebody's residence, albeit a fancy one, than at a restaurant, and brought it to the Western Hemisphere.  (Yeah there have been restaurants in the San Gabriel Valley named Private Kitchen and Private Party, but they were regular Chinese restaurants operating in shopping centers.)  So obviously on these grounds, Eight Tables was a new experience for me.  But even beyond that, as I have written about in the past, there isn't a lot of high level fine Chinese dining in the United States, and I've certainly never had any.  And hand in hand with that, I've never experienced a tasting menu at a Chinese restaurant.

For now access to Eight Tables is made through the front entrance of China Live and up the stairs, rather than from the pre-pandemic entrance on Kenneth Rexroth Pl. off Vallejo St.  This takes you into a parlor with walls that are adorned with old photos of what turns out to be George Chen's family.  From there you enter the dining room that literally has eight tables, partitioned off into semi-private spaces, with a well appointed staff in designer suits.  The restaurant has been painstakingly decorated with such features as white Chinese wedding dress lace wallpaper.  No wonder Time magazine named Eight Tables as one of the best appointed dining rooms in the world. 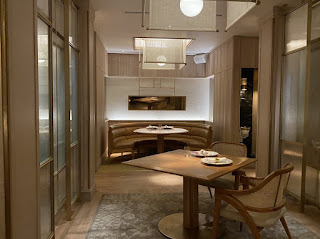 The nine course tasting menu dinner is preceded by Da Hong Pao, a premium oolong tea.  Wine lovers can get an optional wine selection paired specifically with each dish. 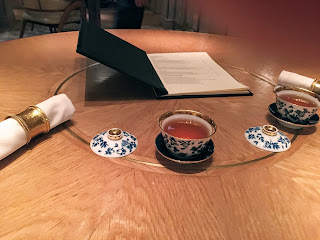 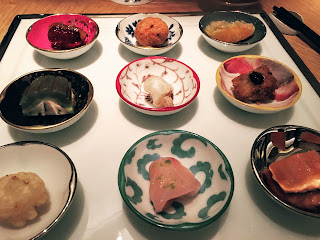 We thought the fingerlime in the sour dish was fish roe, but as you can see from the interior of the fingerlime, it was actually fruit based. 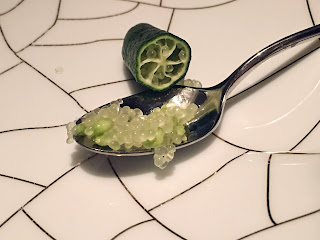 The first regular dish was the asparagus with Kaluga caviar, on a bed of tofu and with bracken fern, which like most of the dishes were locally sourced.  In this case, even the caviar. 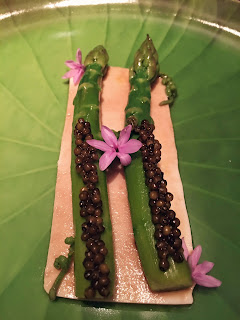 An interesting element of the tasting menu at Eight Tables is some of the dishes are elevated versions of otherwise common Chinese dishes.  For example, here is their foie gras xiao long bao. 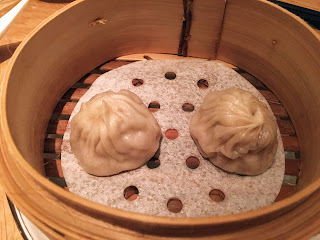 A nice combination of Monterey steamed squid, fried oyster on top of a squash blossom with sweet and sour sauce on the side. 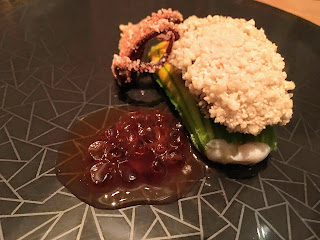 Here's a better look at the fried oyster and squash blossom deconstructed.  The meat from the squid is incorporated in the squash as are fish eggs.. 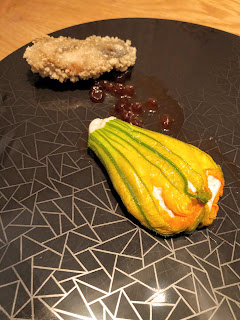 Another riff on a more traditional dish is this shrimp toast.   There are separate layers of shrimp and langostino paste, and the sauce is a uni based emulsion. 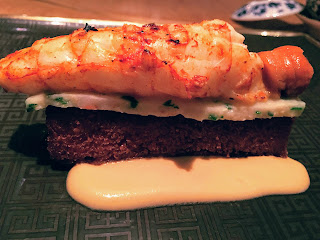 This steamed egg pudding may look like simple fare, but is a powerhouse dish.  Slices of porcini mushrooms, abalone and ginseng chicken top thin layers of silky smooth steamed eggs served with wonderfully rich chicken and abalone broth.  And the balls of medjool dates add a fantastic touch. 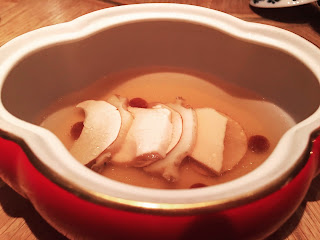 This is the partially deboned osmanthus smoked squab with glutinous rice, dried scallop and garlic chive. 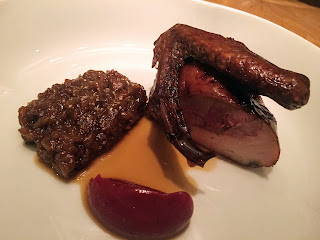 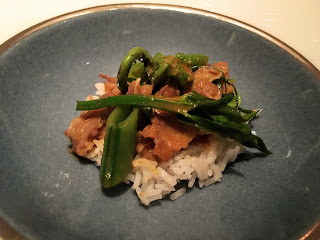 Another elevated Chinese classic is the Iberico pork char siu with fish fragrant eggplant and fiddlehead fern.  The inclusion of fiddlehead fern is interesting since it is a vegetable that is foraged locally in the San Francisco Bay area. 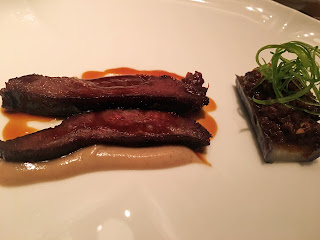 Continuing with the theme of elevated Chinese classics, this fried rice (which was brought as a side dish to the char siu) is the best fried rice I've ever eaten.  And that's saying a lot because in my youth when I transitioned from eating only soy sauce and rice at Chinese restaurants to slightly more diverse dishes, my favorite was fried rice.  So what makes this fried rice so great?  For one thing, it's made with Carolina Gold rice, imported from South Carolina, which retails from between $5 to $10 per pound.  That price reflects the fact that many people consider Carolina Gold to be the best rice around. In addition, while the dish is made with only Carolina Gold rice, it is a mixture of rice that has been pan fried, deep fried, and puffed/popped.  What a combination! 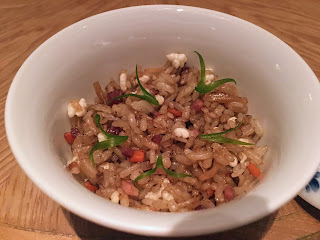 Dinner came to an end with this wonderfully refreshing dessert, called jasmine tea rice pudding.  But again the simple description belies the beauty of this dish, with an ironic pairing of jasmine tea foam and jasmine rice, hibiscus sorbet, and diced dragon fruit. 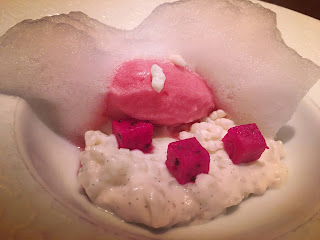 We were honored during the dinner by the presence by Eight Tables Executive Chef George Chen, the man who took a white elephant structure in a neighborhood facing an uncertain future and had the vision to conceive and then sucessfully bring the entire China Live project to fruition. 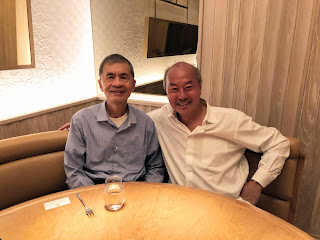 Thanks also to Chef de Cuisine Floyd Nunn for the tour of the stunningly large kitchen. 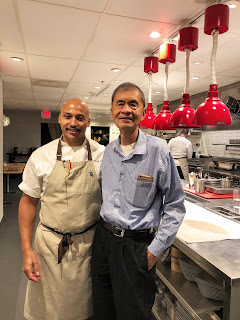 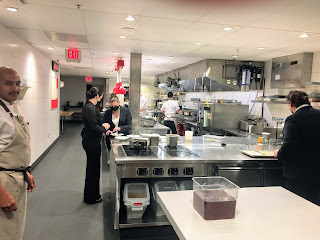 For somebody who thought he had seen it all with respect to Chinese dining in America, dinner at Eight Tables was definitely the meal of a lifetime.

Posted by Chandavkl at 2:24 PM