Where’s The Chinese Food in Brazil and Argentina?


Having just returned from a 10 day tour of Brazil and Argentina this is my obligatory summary of the Chinese food portion of my trip.   And let me say at the beginning that this is going to be a very short write-up, because I only saw three sit down Chinese restaurants during the entirety of the tour of Brazil and Argentina, and I ate at all three of them.  And the only other Chinese food I saw were the two branches of Magic Dragon, a Chifa (Peruvian Chinese) chain located in the food court of two large shopping malls in Buenos Aires.

Such a paucity of Chinese restaurants was a real surprise, as on past trips all over world, just looking outside the tour bus window or walking around our hotel would lead to numerous Chinese restaurant sightings.  But not on this trip.  When we arrived in Rio de Janeiro at our hotel on Copacabana Beach, I asked the tour guide whether there were any Chinese restaurants in the vicinity.  She said there weren’t.  However during a stroll across from Copacabana Beach, I did spot Restaurant Chinese Palace about four blocks from our hotel, and I returned one night for a late snack of dumplings which were better than I would have expected, though certainly nothing exceptional on an absolute basis.  I subsequently spoke to other tour group members who ate at Chinese Palace who indicated the food was passable for someone longing for Chinese food, but there was a clear problem with the availability of ingredients.  For example, the chow mein dish was made with dry ramen noodles.  And that was it for Brazil.

Similarly, no Chinese restaurants were seen during our bus tour of Buenos Aires or walking the area near the Panamericano Hotel on the incredibly wide 9th of July Ave.  However, returning to the hotel one afternoon, I grabbed a street map which included an advertisement for Bao Kitchen Taiwanese Bistro.  Taiwanese food in Buenos Aires?  Who would have thought that?    And it was less than a mile away from the hotel, so I walked on over there.  Sure enough, Bao Kitchen served Taiwanese items including pork gua bao, chicken gua bao, curry bao, beef noodle soup, three cups chicken along with other items.  The curry bao, with a panko crust was different and extremely good., while the gua bao were OK  The lady running the place proclaimed that Bao Kitchen was the best Chinese restaurant in South America.  She also indicated that Buenos Aires had a small Chinatown that was about 3 blocks long, around 20 minutes north of town, but that all the Chinese restaurants there were terrible.  I later read that the small Chinese community in Buenos Aires was dominated by Taiwanese, which would explain the existence of a Taiwanese restaurant downtown.  However, all of the other customers while I was at Bao Kitchen were non-Chinese, presumably ordering off of the Argentinianized part of the menu. 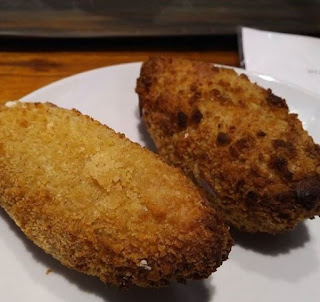 The last Chinese restaurant of my trip was Lung Hung, a Chifa restaurant across the street from the giant Abasto shopping mall, which we found after deciding to see what things looked like outside the mall.  I suspect it's no coincidence that three of the four Chinese eateries I encountered in Buenos Aires were Peruvian, as that's the only concentration of Chinese in South America that I'm familiar with.  The menu at Lung Hung was puzzling, as even though Mrs. Chandavkl is conversationally fluent in Spanish from her days teaching Central American students in East Hollywood, she wasn't familiar with the words describing most of the dishes.  So we decided to play this one safe, settling for the Chaufa chicken (chicken fried rice) and my requested “pollo con fideo” dish.  The rice was pretty good (of course, it’s hard to mess up fried rice) while the chow mein was so so, as it was not made with the thin noodles that I have had at Chifa restaurants in Florida.   None of the staff was Chinese, and maybe only one of the customers was Chinese.  Perhaps the most memorable part of the visit was live music, a guy playing "El Condor Pasa" on his recorder. 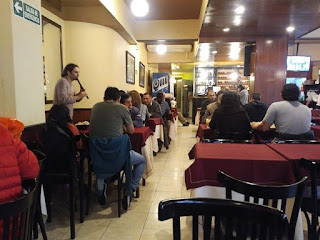