Since I have been churning out an increasing number of articles relating to Chinese restaurants in the United States for Menuism, and occasionally L.A. Weekly, I've been contemplating printing up business cards identifying myself as some kind of food related writer, and listing the websites where my writings can be found.    But even though this thought came to me some time ago, I hadn't acted on it, and for one particular reason.  That is the fact that I couldn't come up with a description that adequately described what I wrote about.  I have been described in a number of ways in the five years that I have been writing about Chinese food, but technically, none of them are correct.  I'm not a Chinese food expert or maven , just a guy who's eaten at a lot of Chinese restaurants.  I'm not a Chinese food blogger, since in my writings, the food itself is peripheral, indeed often highly peripheral to what I'm writing about.   Foodie is way off the mark since I never photographed my food until my Twitter followers complained about the lack of pictures accompanying Tweets describing my meals, and I still delete those photos from my camera and picture collections as soon as they're uploaded to Twitter and Instagram. "Celebrity diner" and "iconic eater" are probably more descriptive, much are much too pretentious.  And while my personal favorite was the time I was called the "Batman of Chinese Dining," I never did figure out what that meant.

However a recent Chandavkl blog post about my past life from the mid-1970s to early 1980s speaking and writing about elements of the history of the Chinese in the United States has provided the answer.  As I and others have previously written, my interest in Chinese food was merely an extension of my interest in the overall Chinese experience in the United States, and my current writings are just as much a reflection on the historical experience of Chinese Americans, as it is about the food that I am ostensibly report about.  So ladies and gentlemen, this is what my new business card looks like. 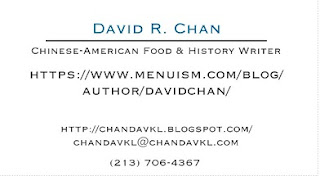 Posted by Chandavkl at 2:17 PM