A Week In San Francisco (Sort of)

Going to San Francisco for a week sounds like the blueprint for a wonderful time.  But when our Monday through Friday trip entailed driving from Los Angeles to San Francisco on Monday, spending three full days in a seminar on Tuesday, Wednesday and Thursday, and driving back to Los Angeles on Friday it sounds a lot less enticing.  But despite the lack of sightseeing, the opportunity to try out some restaurants did make the trip very enjoyable.

Driving up Interstate 5 and then I-580, we stopped for dinner in Dublin.  Originally I thought about going to the Mayflower Restaurant which was supposed to be pretty good, but which was a chain that I had eaten at in a number of Bay Area locations,  So we headed instead to Golden Sand Harbor on Amador Valley Blvd.  The waitress there was a little pushy and she directed us away from the dishes we asked about initially, ending up with seabass with garlic and rib eye with mushrooms, along with seafood soup. Seabass was quite good, rib eye and soup were so so.  Pricey at $63 before tip. Exchanging messages with my son back home who had recently eaten at Mayflower in Dublin, he indicated that Mayflower was likewise pricey with food also far below San Gabriel Valley quality.

My seminar was conveniently located on Market Street and just a couple of blocks from our San Francisco office so I shuttled between the locations all week.  On Tuesday morning I walked across the street to make a dinner reservation at Hakkasan.  On my way there I spotted the sign that seemed to say "Nepalese food" on this trailer sitting in front of one of the Market St. office buildings.  It turned out to be Bini’s Kitchen where I ordered a batch of turkey momo with spicy tomato cilantro sauce.  (See below.)  Wow!  I'd be a regular if I worked in downtown SF.   After class let out at 6pm and it was across the street to Hakkasan.  This was my first dinner at Hakkasan after trying the lunchtime dim sum at their Manhattan and now-defunct Beverly Hills locations.  There were lots of interesting items on the menu, and we ended up with the fried silver cod, the home made tofu with soybeans and dried scallops, and the Sanpei chicken. Everything was so perfectly prepared and tasty.

Pickings were slim at Wednesday’s seminar breakfast so I was hungry by 10am and coincidentally the Nepalese restaurant opened at 10 am, so I went across the street to get another order of the turkey momo. Wednesday’s dinner was another highlight, as we met my nephew for dinner at our favorite, Cooking Papa in Foster City.   We had an excellent dinner of two types of fish broth noodle soup (egg noodles  in one order, thick round rice noodle in the other), duck cheung fun, egg tofu, lotus leaf sticky rice,  white ong choy and pepper beef chow mein.

Thursday was my one lunch exploration day, since the late morning session turned out to be not useful  It was an eight block walk to Let’s Jam Café in the tenderloin, one of the few Mongolian restaurants in the US.  The huushur (beef dumpling) was huge.  Kind of like a hamburger patty in a pita bread, sliced in half.  Five of these dumplings for $10 was a good deal and kept me full the whole day.  For a change I thought it would be a good idea to have Italian food near the hotel. for dinner  We wanted to eat at Capps Corner, where we ate a few times.  We liked it because the meals are reasonable and came with soup and salad included.  However, when we got there the storefront was empty with a For Rent sign.  As it turns out, after 40 years the restaurant got in a dispute with the landlord and shut down.  As a result we ended up at North Beach Restaurant at Stockton and Columbus, another Italian restaurant that had been there for decades, with a jolly, throwback maitre’d.   We had the spaghetti in vodka sauce and the linguine with clams.  Both were pretty good.

Friday we picked up various types of dim sum for the trip back.  Highlights were a poor man’s version of the crispy top bbq pork bun for $1.25 from iCafe Chinatown and the sticky rice from Good Mong Kok, not wrapped in lotus leaf, but rather a wonton type of skin.  And perhaps the most interesting sight on the drive back to Los Angeles was the innovative strategy to deal with the drought and the cutback in irrigation in the San Joaquin Valley--a nopal (large edible cactus) farm. 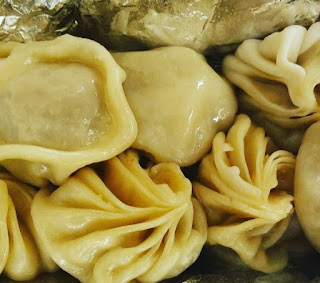