Though I moved away 20 years ago, I have lived a majority of my life in what is now referred to as South Los Angeles. Consequently, when I heard that President Obama was going to have a fund raising breakfast in my old View Park neighborhood, where we still have our old family homestead, I was very intrigued even though I'm not a particular fan of his policies. And when I found out that the venue was just a block away from the old home, on Kenway Drive, I thought about staying there overnight just to see what it would be like this morning. Unfortunately that was totally impractical, but I was able to convince my son that the house was not haunted, and that it would be fun for him to stay there. So earlier this morning he went down to the event site and was able to take in the festivities and see the presidential motorcade.

What I found interesting was the impact of the Obama motorcade on traffic. Prior to this morning's visit speculation was that the president would travel from the Beverly Hilton to View Park via surface streets like Robertson or La Cienega, or perhaps the Santa Monica Freeway to La Brea Ave. It was also funny to see the listing on a traffic website of "Stalker Ave." as a street that could potentially be blocked off. (It's Stocker St., named after Lucky Baldwin's son-in-law.) However, they ended up taking the San Diego Freeway south to Slauson Ave., which is the exact way I travel from the Westside to the old home. While it was possible that route could actually take him in front of the old home, Eric said it did not go that way. The president may have gone by, however, when he left View Park for LAX.

Strangely, the real impact on traffic was felt greatest in the San Fernando Valley. As the president traveled to View Park, the San Diego Freeway was shut down for a half hour in both directions between Wilshire and Slauson. For those who keep score, the San Diego Freeway is the primary transit route between the Valley and the Westside, so cutting this off for a half hour during morning rush hour obviously backed traffic well into the Valley. And it backed up the northbound 405 to Long Beach. But of equal impact was the domino effect on other freeways. For example, as I drove from the Hollywood Hills to Century City this morning, I crossed over the Hollywood Freeway near Hollywood Blvd. and saw traffic was totally stuffed, far worse than normal, as cars avoiding taking the San Diego Freeway out of the Valley chose to take the 101 instead. All in all it was a mess. And it's a good thing for the president that California is a safe state for him in this November's election, since his numerous fundraising trips to Los Angeles and the ensuing traffic jams have irritated a lot of motorists. 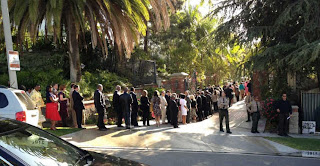 Posted by Chandavkl at 2:33 PM