A Stroll Through Brooklyn Chinatown 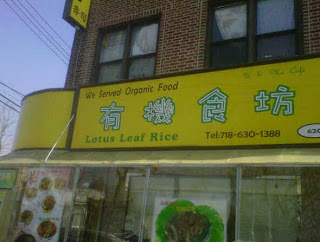 Brooklyn Chinatown is a long shoestring of a Chinatown along 8th Avenue. When we visited Brooklyn Chinatown in the 1990s, it was all of four blocks long from 55th St. to 59th St. When I went back in 2006, it ran from about 48th St. to 61st St. Now it runs from 40th St. to 65th St. The reason for the shoestring development is that "8" is the luckiest number in Chinese culture. I don't know why, it's just something about the way the word sounds. Consequently, everybody wants to open a business on 8th Ave., and very few want to do so on any other street. As a result, Brooklyn Chinatown is now 25 blocks long and about 2 blocks wide.

As late as my 2006 visit to Brooklyn Chinatown, all of Brooklyn Chinatown was north of the N subway stop on 8th Ave.. So when I got off the subway I was surprised to see Chinese businesses to the south, so that's where I immediately headed. My first stop was at Chili & Chilly where I ordered the "fried shrimp dumpling", not knowing what to expect. When the waitress brought out what looked like plain old ha gow, I was a little disappointed. But when I bit into it, I discovered that the ha gow had been deep fried, despite the fact that the wrapper was still its regular white color. It was so delicious! Chili & Chilly was one of many storefront operations carved out of one block long building between 63rd and 64th Streets. I noticed several other eateries on the block, along with the sign "Fei Long Food Court." I had read about this newly opened food court on Chowhound, which was associated with Fei Long Supermarket and was surprised to see that the food court consisted of individual shops on the street, as opposed to a true food court. I was ready to head north on Eighth Avenue but I was a little puzzled about not seeing an entrance to the supermarket. I saw a map on the wall which pointed to the entrance being between two of the storefront restaurants. Funny, I didn't see anything that had looked like a supermarket entrance. I went back to that spot and only saw a narrow doorway covered by long thick vertical plastic strips, like you see sometimes at the entrance to a walk in refrigerator case. I stepped through and guess what? No, not the supermarket, but an indoor food court with a dozen Chinese eateries. And to think I almost missed the real food court if I hadn't been looking for the market. I checked out the various stalls and took a peek at the market which was further inside. I also sat down and ate some of the peanut noodles I had bought at Yuan Bao, which was another one of the exterior eateries.

Finally headed up 8th Street, I stopped at the dim sum house at 60th St. that was called Diamond on Eight (sic) in 2006, but was now Super Lucky Seafood. It was 3 pm, and I was lucky that they did have some beef cheung fun left among a very small dim sum selection. At 58th St., and actually not on 8th, I spotted the cleverly named Restaurant on 58th St. Chinese Restaurant. With a name like that I had to eat there, and since they served lunch specials until 3:30 pm I was able to get a nice order of tofu and fish for less than $6. However, my primary target for this excursion really was Pacificana Restaurant on 55th St., which opened up shortly after my previous trip to Brooklyn. I have often commented that New York City Chinese food is mired in the 1990s, far behind what one finds these days in Los Angeles, San Francisco, and in particular, Vancouver and Toronto. In reading about Pacificana, I thought that it might something better, more akin to our Elite, Sea Harbour, Lunasia, etc. in the San Gabriel Valley. However it was pretty clear that this was not the breakout New York Chinese restaurant I was looking for, with dim sum cart service and fairly ordinary varieties of dim sum.

The other target for the day was going to be Yunnan Flavor, the only Yunnan restaurant in the US aside fron the chain of Yunnan Garden restaurants in the San Gabriel Valley and Las Vegas. However, when I got there, I saw a long line--of mostly caucasians. Uh oh, the place was discovered. I figured it wasn't worth my wait so I trudged further up Eighth Ave. At 46th St. I spotted the strangely named Chen Fulin Kwok restaurant. Historically, Brooklyn Chinatown, like Manhattan Chinatown was exclusively Cantonese. However, the eastern part of Manhattan Chinatown has turned entirely Fujianese in the past 20 years or so. I had read that Fujianese were moving into Brooklyn Chinatown, too, and "Fulin" looked like the word "Fuleen", which is a name adopted by a number of Fujianese owned Chinese restaurants across the eastern, midwest and southern states. (Fuleen appears to be the Fujianese version of the name Fu Lin, a Chinese word which connotes happiness and fortune, and which has been attached to numerous Chinese American restaurants for decades. However, the name Fuleen has only popped up only in the last decade or two, and only in the eastern U.S. where Fujianese dominate the Chinese restaurant business.) I looked at the menu and to my excitement, I saw "fish dumplings", a common and favorite dish of mine at San Gabriel Valley Chinese restaurants but basically unheard of in New York. However, when I tried to order them, the lady said she was out. I then settled for something called "fish ball and fish" soup instead.

Reaching the end of Eighth Ave. Chinatown, I had traversed 25 blocks. Instead of walking the 22 blocks back to the N train at 62nd St., I had discovered you could catch the D train at Ninth Ave., which would drop me off directly under my hotel in Midtown Manhattan. Congratulating myself for being so clever, I headed over the Ninth Ave. I thought the stop was around 45th St., but I didn't see any subway station. Well maybe it was 49th St. No, not there. So I kept on going and headed all the way back to the N train. (As it turns out the subway station was just off of Ninth Ave., but it didn't matter since the D line was out of service for the weekend, as I would find out the next day.) At this point I was very tired, so I went back to the Fei Long Food Court, sat down, and ate up some more of my food. I opened up the fish ball and fish soup to find something that looked like wontons. Hmph. They messed up my order. I started eating them, and about half way through I realized that these won tons had fish skin wrappers, albeit not as elastic as other versions I've had in the past. Just shows you can never tell what the description of a Chinese dish might really mean.
Posted by Chandavkl at 2:30 PM