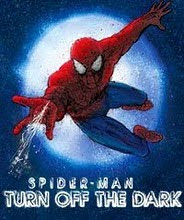 After twenty some odd trips to New York City, I finally made it during the spring time. Most of our trips have been in the winter, and it turns out that these visits have given us a skewed view of the city, and I'm not talking about the weather. Rather, seeing the crowds in Manhattan, especially Times Square, I was overwhelmed by the wall to wall people this week that isn't there in the winter. Two things appeared particularly noteworthy about the crowds. First of all there were large numbers of school groups, presumably visiting New York for a spring vacation field trip. Secondly, hordes of European tourists, likely taking advantage of the weak dollar. I'm guessing every other guest in my hotel was from Europe.

Also interesting is the weather. It was in the 50s and cloudy on Friday, Saturday, Sunday and today (Tuesday). It was 80 degrees and sunny yesterday afternoon, though it was still cloudy and cool at 11 am. That would never happen in California. I guess yesterday they had what is referred to as a warm front, a term unheard of back home.

Also got to see the Spiderman musical, now in its fifth month of previews, and ready to officially open in about two months. No cast or crew were injured during my performance of the show.

Finally, made my first official visit to the Bronx. We did get lost in the Bronx late at night 7 years ago after inadvertently exiting from the freeway (can you say Bonfire of the Vanities?) and almost crossing a bridge to who knows where, but this was the first visit, on purpose and on the ground. Yankee Stadium was a tremendous disappointment, as the new stadium is sterile and nothing is visible from the outside. But Fordham Road was tremendous with the wide boulevard, vibrant shops, and Carribean residents.
Posted by Chandavkl at 1:27 PM