A wedding in Monterey was the perfect excuse for a two day side trip to San Francisco.  Through a combination of circumstances, most of our notable eating was concentrated on our second day there, Friday.  As many people know my favorite Chinese dish these days is the Tim Ho Wan style crispy baked bbq pork buns.  At sit down restaurants, a small dim sum sized bun can come to $3 each, but at iCafe on Waverly Place in San Francisco Chinatown you can get a giant one for $1.50.  And the iCafe version is better than some dim sum palace versions.

Breakfast was light as we had planned an early dim sum lunch at the Guangdong based HL Peninsula Pearl branch in Burlingame.  I had read that the restaurant filled up early, so our friends got there at the 10:30am opening to grab a table and indeed the restaurant seemed to be full by 11am.  We had a variety of old and new dim sum items.  Versions of lotus leaf sticky rice and bean curd rolls were excellent, har gow, chicken feet, and beef cheung fun with corn were good.  The star of the show, though, was the piggie mango pudding, very visual and as good as this dessert gets. 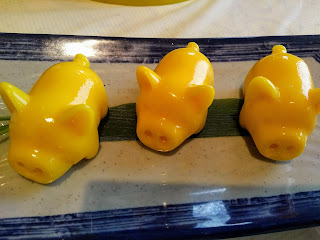 Another highlight was the house special bbq pork plate.  Skin was crispy, meat was tasty (as was the fat) though at $18 for eight small pieces this was on the pricey side. 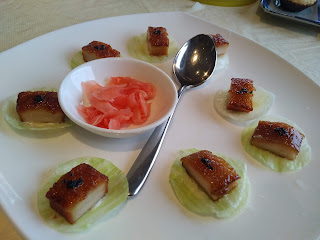 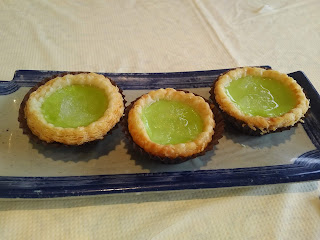 The most visual, but least tasty item was the pumpkin green bean paste bun. 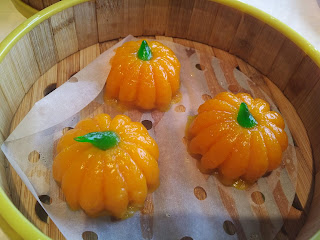 All in all, while not in the category of San Francisco dim sum restaurants like Dragon Beaux and Hong Kong Lounge, I can see why the HL Peninsula locations are so popular.

Moving on, I had kept hearing about this dumpling place called Dumpling Time which was a little too far to reach on foot from my annual Market Street meeting, which was located somewhere in the general vicinity of the Nordstrom Rack just off the 101.  So I did a Google map inquiry and found Dumpling Time was located just three blocks away from Nordstrom Rack where I dropped off Mrs. Chandavkl.  Unfortunately I couldn’t read the Google map orientation properly and started going in the wrong direction, but after a block I realized my mistake and turned around.  It’s amazing how the neighborhood around the Nordstrom Rack had changed in the years since we started going there probably 15 years ago.  What was a dumpy area to the east is now a vibrant location with Zynga having their headquarters building, and other new developments.  With two major restaurant visits set for the day, I only ordered the chicken bao which appeared to have slivers of wood ear fungus mixed in, which provided a good contrast.  Also they provided a different look from the normal chicken bao. 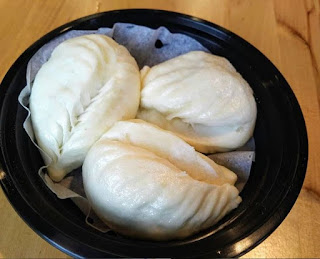 When we got back to the hotel after 3pm, it was still four hours before dinnertime so an additional snack was in order.  The previous evening I had noticed a newly opened restaurant called V & J Restaurant and noticed they had a special happy hour menu during the off hours of 10am to 11am, 3pm to 6pm, and 10pm to 11pm.  The values were amazing so I had ordered cod in spicy broth for $4.50 and snow pea leaves for $6.50 that night, so we we ordered a reprise of the snow pea leaves for our snack.  We also picked up breakfast and lunch from  V&J before our Saturday drive down to Monterey, scoring Chinese broccoli, bean curd sheet sticks, drunken chicken and chow chicken lai fun (a type of Cantonese noodle we seldom see in Los Angeles) for the grand total of $20.50 plus tax.

We had a 7pm reservation for our return visit to Palatte, and before we left for San Francisco I wanted to be sure that we took the right bus to get there.  In June we had asked the front desk how to take the bus to Fisherman’s Wharf and they told us to catch the #8 bus on Columbus, which made perfect sense since many years we rode a bus that went along Columbus and took us to the Wharf.  But in June we were stunned to find that the #8 bus left Columbus and ended up taking us to Pier 39.  So checking the mapping services beforehand, it was clear that we should take the #30  bus which would take us up Columbus towards Ghirardelli Square.  The only question I had was where on Stockton Street to catch the bus–Columbus or Pacific/Jackson.  The front desk wasn’t helpful so we decided to get on at Pacific/Jackson, which turned out to be the right choice since I saw the bus about to reach the stop and I literally sprinted to catch it.  Except when I mentioned to the bus driver we wanted to go to Fisherman’s Wharf he said we were on the wrong bus.  What??  But he said not to worry, he could take us two stops where we could transfer to the right bus, the #8.  Wait a second, I said, the #8 goes to Pier 39 and I don’t want to go there.  The driver tells us no, Pier 39 is Fisherman’s Wharf.  Which explained everything to me.  In the old days there was no Pier 39 and to us old timers, Fisherman’s Wharf meant the area with all the fishing vessels docked by Alioto’s restaurant.  The Wharf area then expanded west adding places like the Cannery, the Anchorage and Ghirardelli Square where Palatte is located.  But then it expanded east, including the development of Pier 39, such that today Pier 39 is considered to be part of the Wharf, while Ghirardelli is not.  So anyway we were on the right bus for Ghirardelli Square, and in fact the bus let us off across the street.

When we got into Palatte the place was packed, which made us very happy.  Ghirardelli Square was pretty dead the past few years and Palatte has really revitalized it in just a few months.  Dennis Leung, who had hosted us there in June, was not around, but fortunately at the end of our June visit he introduced us to his floor manager, Ken, and after chatting with him a while he remembered us from the prior visit, and we were treated quite well.  He pointed out the special menu printed on a small slip of paper that we actually had ignored when making our dinner selections, so we ordered two items off of that menu, the black cod stuffed with eggplant and the Iberico pork rice noodle rolls, both of which were excellent.  We also ordered our two favorites from our first visit, the fried tofu cubes and the crab rice noodle rolls, which while quite good didn’t wow us like the first time, though I'm sure they actually tasted the same as before.

We were so full that we had to cancel our squid ink fried rice with shrimp order.  We were ready to leave when Ken came over to tell us about their desserts.  We said we were full, but he said they were on the house.  So we got the chocolate egg rolls accompanied by a lychee based sauce). 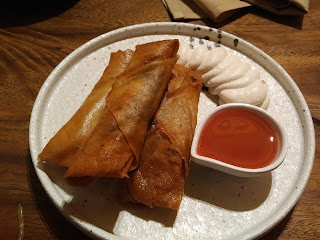 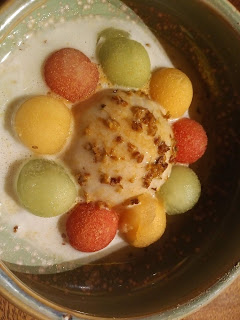 I asked Ken about the progress of their San Mateo location and he said he thought it would be open in December or January, so we'll be sure to visit the new Palatte location on our next Bay Area trip.

One last noteworthy food related aspect of the trip was the Saturday morning visit to Beijing 49er, a newly carved out 1st floor eatery in what had been the two story Chinatown Restaurant on Washington St. in Chinatown. 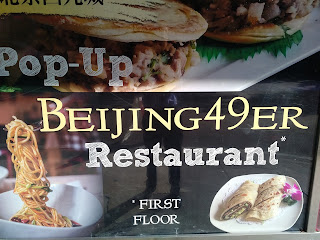 This has to be the stupidest name ever for a Chinese restaurant because all of the Chinese who came to California for the Gold Rush in the mid-19th century were from the areas outside of Canton in southern China, where the law against Chinese emigration abroad could not be enforced.   So there were no Beijing 49ers back there, nor have any Beijingers ever played for San Francisco's NFL franchise.  Of course this was to be expected from probably the biggest tourist trap in Chinatown.  But I did like the crystal chicken dumpling, the first time I've seen this type of dumpling made with chicken instead of shrimp.

Posted by Chandavkl at 6:51 PM